Whether it's digital signage, a computer monitor, or a home theater, you're constantly being affected by a display interface. Often times, several types are working their magic at once. However, it's when they don't work that people pay the most attention. Understanding the different outputs could spare you from some future headaches. It's a wide world, but the three most common standards are DVI, HDMI, and DisplayPort.

Here's a quick rundown on each:

DVI: Flexibility's the name of the game

DVI (digital visual interface) comes in multiple formats: DVI-D, being digital only; DVI-A, which just carries analog; and DVI-I, that contains both digital and analog. Typically, DVI doesn't handle audio signals, but its flexibility is a plus. For instance, if your media player has an output for DVI-I, you can connect it to either a VGA (analog video) monitor or a DVI or HDMI (digital video) monitor without the need to use pricey video converters.

The standard use of DVI, is called Single Link DVI , capable of resolutions up to 1920x1200. DVI may also includes provision for a second data link for high resolution displays, referred to as DVI-DL (Dual Link). Dual link DVI uses of all 24 pins of the DVI connector to achieve mega high video resolutions up to 3840x2400.

HDMI® (high definition multimedia interface) is similar to (and compatible with) DVI in resolution and image quality. But the key difference is that HDMI transmits both video and audio signals. While its connectors differ from DVI, both standards have the same video encoding. So, if you link a DVI source to an HDMI-to-DVI cable, you won't need a signal converter.

HDMI can handle a single video stream and a single audio stream, so it can drive only one display at a time. That's fine if you use a single monitor or a TV, but many people use more than one display these days. These use cases aren't limited to stockbrokers keeping one eye on a ticker and the other on news headlines, either. Many gamers use two or more monitors simultaneously. And once you become accustomed to having multiple screens on your desk, you won't want to go back. 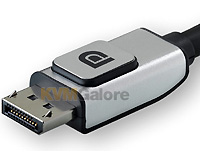 DisplayPort often works as a compliment to HDMI. It mainly connects video sources to displays like computer monitors, but it can also carry audio. One of the standard's major benefits is its multiple video outputs. In other words, it can support up to four monitors on a single cable. Unfortunately, DisplayPort cannot carry Ethernet data, nor does it offer an audio return channel. 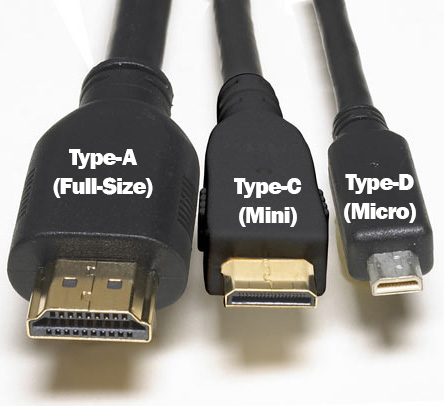 DVI uses one 24-pin connector-type for all its flavors (DVI-i; DVI-D; DVI-A), although each flavor uses a different number of pins.

HDMI connectors have 19 pins and are most commonly seen in three sizes: Type A (standard), Type C (mini), and Type D (micro). Of these, Type A is by far the most common. A fourth category of HDMI connector, Type E, is used for automotive applications. Most HDMI connectors use a friction lock, meaning that a tight fit keeps the plug mated to the socket, but some vendors have developed proprietary locking mechanisms designed to prevent the cable from pulling loose.

The locking connector common to full-size DisplayPort connectors, is a great feature that appears on only a few HDMI Type A cables.

The biggest problem with HDMI cable is that there are multiple standards that developed in conjunction with the evolution of the HDMI standard. Many, older cables are not adequately labeled to identify their capabilities. Using an HDMI cable that isn't up to a particular task can yield problems including visual and audio glitches, artifacts, and audio/video synchronization problems. Here are details on the types of HDMI cables that were defined as of the HDMI 1.4 specification:

A 3rd category of HDMI cables was defined to match the features of the HDMI 2.0 specification:

All types of HDMI cables have a feature called the audio return channel (ARC) that can send the audio from the TV tuner in your HDTV back to your AV receiver. Prior to ARC's introduction, you needed to connect a second, audio-only cable between your TV and your A/V receiver to play sound from the TV tuner. (Note: ARC is unnecessary if you subscribe to cable or satellite TV and use a set-top box.)

"Active" HDMI cables have integrated circuits embedded in the cable to amplify the signal. Active cables can be longer and thinner than passive cables (thinner cables are less likely to fail when forced to make hard bends).

DisplayPort cables are much simpler to define: There's just one type! The current version, DisplayPort 1.2, delivers enough bandwidth to carry video resolutions of up to 3840x2160 pixels at a refresh rate of 60Hz, and it supports all common 3D video formats. DisplayPort cables can also carry multichannel digital audio. On the other hand, DisplayPort can't carry Ethernet data, and the standard doesn't have an audio return channel (ARC).

A passive copper DisplayPort cable can support extremely high data rates (a video resolution of up to 3840x2160) over a length of 6.5 feet. If you want to run a passive copper DisplayPort cable as long as 50 feet, the standard says you'll be limited to 1080p resolution—but the spec is conservative, and in practice that 50-foot cable can carry enough data to support resolutions as high as 2560x1600 (sufficient for a 30-inch display).

Which display interface is best?

Inherently, one interface isn't better than the other. HDMI was designed primarily for consumer-electronics applications: Blu-ray players, TVs, video projectors, and the like. Despite the confusing cable specifications, it does things that DisplayPort can't. Meanwhile, VESA designed DisplayPort to be the ultimate display interface for computers, so it complements rather than replaces HDMI.

HDMI carries audio and video, whereas DVI carries video only. In comparison, DisplayPort isn't limited to video signals like DVI, but it does not carry Ethernet data like HDMI does, and does not support ARC. DisplayPort 1.2, however, does support multiple screens (via MST).

At the end of the day, your video interface will be likely determined by the hardware you get, but knowing their capabilities and limitations can help manage your expectations.