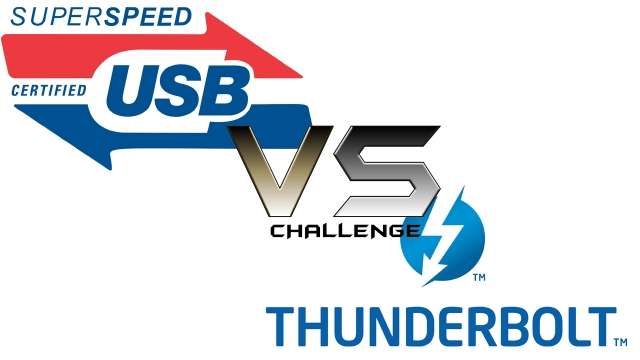 The ever ubiquitous USB is getting major competition from Thunderbolt!  While USB is definitely the mainstream choice of connecting devices, it’s undeniably slower than Thunderbolt and often doesn't offer the type of leeway the latter might.  Intel’s Thunderbolt has arrived on the PC after being exclusive to the Macintosh platform for more than a year.  With its promise of 10Gb/s‑per‑channel throughput, what self-respecting power user wouldn't opt for a Thunderbolt-based external backup solution?  Well, before you get too excited, let’s compare T-bolt point-by-point with its natural competitor, USB 3.0.  After all, there’s more to a technology than pure performance, as we found out.

Here's a quick summary of how to choose for your needs:

USB 3.0
USB adoption is virtually 100% in over 10 billion units and growing at more than 3 billion a year (computerworld.com). Easy to come by and use, USB would be the simple choice for common connectivity devices, such as keyboards, printers, and mice.  Its transfer rates top out at around 5Gbps, however, and which generally regarded as insufficient for people with a serious need for speed (i.e. those transferring huge amounts of hi-def data). USB developers intend to compete with Thunderbolt, but we likely won’t see any significant improvements in efficiency until 2014 (extremetech.com).

It's hard to imagine Thunderbolt "killing" USB, but one thing is for sure: Thunderbolt is definitely giving USB a run for their money. Developed by Intel, Thunderbolt carries speeds up to 10Gbps.  Its speed and flexibility -- daisy chain up to 7 devices!--has made Thunderbolt the best for transferring HD data, hands down.  It's not nearly as commonplace as the USB, and brands outside the Apple family have not fully adopted Thunderbolt in their technology. Even so, we can look forward to seeing a lot more Thunderbolt-compatible Window systems from Acer, HP, Dell, and ASUS this year.

Intel created USB in the 1990s, and it has been an amazingly revolutionary technology.  USB has scaled from 12Mb/s at its inception to 5Gb/s today with relatively minor road bumps, and is now basically "free", as it's included on Intel’s and AMD's chipsets.  Still, when you play the specsmanship game, it's hard not to fall in love with Intel's newest child: Thunderbolt.  SuperSpeed USB 3.0’s theoretical 5Gb/s, or 640MB/s, looks impressive until you notice that Thunderbolt can move 10Gb/s over its copper interface.  Oddly, the 10Gb/s speed is actually a misrepresentation.  Thunder­bolt can move 10Gb/s per channel.  Since it has two channels, it can actually hit 20Gb/s.  That means Thunderbolt theoretically moves 2.5GB/s if you don't account for overhead. Why not call it 20Gb/s? Intel doesn't want to brag, apparently.

You know what's incredible about USB 3.0 today? It’s practically free. It comes baked into chipsets from both AMD and Intel, and even when it’s not native, host controllers cost just two bucks. Thunderbolt's pricing, on the other hand, is crazy expensive.   At least we think so; we don’t know how much the controllers—all made by Intel—even cost.  Early on, one vendor told us $200, which is insane.  Other board makers have since told us that T-bolt chips cost about $30.  Whatever the cost, the fact is that basic boards with Thunderbolt cost about $60 more than similar boards without it.  Let's not even get into the cables, which today cost $50 for a basic 2‑meter span.  By a country mile, USB 3.0 wins this category, and we can't see that changing for the foreseeable future.  Did we mention that Thunderbolt cables cost $50?

USB ports are so common, they're in cars and wall plugs and are as ubiquitous as an AC outlet these days.  Have to bring a boatload of data to your friend’s house? Just unplug your USB 3.0 cabinet and bring it with you.  Even if he doesn't have USB 3.0, you can still access your data via USB 2.0.  That's not the case with Thunderbolt, which is extremely rare even on the Macintosh platform, where it's been supported for more than a year.  If you want to lug your project on your Thunderbolt drive to your friend's house, you'd better bring your computer too, because he or she likely doesn't have Thunderbolt.  Hell, by the end of 2012, Intel was hoping that we'll have 100 devices that support Thunderbolt.  There are likely 100 USB 3.0 devices made in just burnt umber alone.

Why is Intel wielding iron-fisted control over Thunderbolt instead of releasing it to the world?  We believe the company is trying to fast-track the technology by using a unilateral approach to bypass the usual rule-by-chaos that’s so common to committee-driven standards.  Look at Bluetooth, Wi-Fi, and even early USB adoption as examples: Incompatibility raged for years.  Even so, Thunderbolt isn't perfect.  We could not hot-plug our Thunderbolt device without hardlocking the system.  So, epic fail?  Not really.  USB 3.0 really hasn't been smooth-as-silk, either.  Coaxing the highest performance out of USB 3.0 is not easy.  And with more than a half-dozen USB 3.0 host-controller makers, the performance and reliability can be irregular.  Even the board we used for our performance tests, Asus’s P8Z77-V Premium, gave us two USB 3.0 controllers, each with its own modes to enhance speed.

Let’s be frank: It’s hard to make a definitive judgment about the performance of either the Thunderbolt or USB 3.0 interface based on our speed tests alone because of all the variables inherent to the hardware.  Even so, it's obvious to us that Thunderbolt is wickedly fast.  The ATTO benchmark clocked the Promise Pegasus R4 reading files in the 936MB/s range.  We could literally copy 16.9GB of files to the R4 configured with SSDs in 23 seconds.  Our gut says there's likely a lot more headroom left in Thunderbolt, too.  USB 3.0 didn't impress us as much.  The Startech cabinet was allergic to our OCZ SSDs.  Performance wasn't stellar, but it wasn't horrible either.  USB 3.0's speed is actually very respectable, but Thunderbolt clearly has the edge in pure performance.

And the winner is...

Yeah, we know, no one likes a tie, but to recommend one technology over the other at this point would be wrong.  If you need performance external storage for video editing, photo editing, or other storage-intensive needs, Thunderbolt rules.  It's over, right?  Hands down, performance wins?  Not quite. Ubiquity really matters in this world.  As we said earlier, the inability to just grab your data and go to work at a friend’s or colleague’s without wondering if Thunderbolt is available is a major ding. Thunderbolt pricing is also at a premium, but really not quite as over-the-top as we expected.  We acknowledge that T-bolt has other interesting configurations, but we think its primary purpose today will be for storage.

One thing is clear: The showdown between USB 3.0 vs Thunderbolt isn’t over. And as much as their respective proponents deny that the two interfaces even compete, we think both are headed for a major clash down the road.

Bottom line: If you need superior transfer speed, like to capture multi-HD stream on a daily basis or daisy-chain several monitors to your laptop, Thunderbolt is your match made in heaven if your workstation is Thunderbolt-capable.  And, now that KVMGalore offers a great range of prices and lengths to choose from, affordability is no longer an issue!  Check out our new family of Thunderbolt cables now.  Or if you still are dedicated to USB, check out the USB 3.0 devices now available in our 'USB Center'.