If a tree falls in the data center, does it make a sound?

Environmental data center monitoring to protect your IT infrastructure

You don't need a philosopher to tell you that a falling tree will cause some serious damage and most likely knock a lot of IT infrastructure offline (although it does beg the question: Why was there a tree in your data center in the first place?)

The point is, a lot can go wrong in the data center. And downtime is one tree that does in fact make a sound – something to the tune of nearly $9,000 per minute. Whether it's website slowdowns, total outages or some other form of operational disruption, the worst way to learn about a problem is from an angry, panicked, existentially compromised customer.

A much better way to discover a disruption is to learn about it before it happens. No, we're not recommending a time machine. But we are advocating for robust, real-time environmental data center monitoring.

When, what and where should you monitor?

The "when" of data center environmental monitoring is simple: always. More precisely, we mean every second of every day. Your servers are more likely to die a slow death from a gradual water leak or slowly rising temperatures than from, say, a tumbling timber. The more immediately you detect an issue, the better your chances of taking preemptive action that will spare a lot of grief down the road.

And that brings us to the "what," of data center monitoring, which invariably influences the "where." 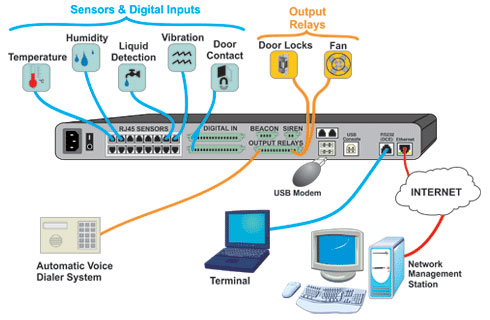 Many data center managers are warming up to the idea of running servers and switches at higher temperatures. Less cooling capacity means better power usage efficiency (PUE), and it saves money. But it also inches you a little closer to the proverbial cliff. Should a server fan or CRAC unit malfunction, temperatures will already be closer to their safe thresholds, meaning sensitive equipment is immediately more vulnerable to overheating.

We're not saying you shouldn't let servers run warm. But if you do, follow ASHRAE's minimum recommendation for temperature monitoring: six total sensors, three for air intake (top, middle, bottom of racks), and same for air outtake. To create more advanced models that allow for extremely precise and possibly even predictive temperature monitoring, consider doubling that number. Remember: You can't stop a problem that you can't see.

If you have too much of it, water may begin to pool on the surfaces of equipment, slowly corroding metals or potentially even causing electrical issues. If there's not enough, the air becomes too dry, inducing static electricity that could harm sensitive electronics. And if you don't have humidity sensors set up, you'll never see any of this coming until it's too late.

Specifically, data center managers must measure for relative humidity (RF), which is expressed as a ratio of the current absolute humidity to the highest possible absolute humidity before the air becomes too saturated to hold more water. Bear in mind that the higher the air temperature, the more moisture the air can hold. But once that 100 percent threshold is crossed, evaporation cannot occur. The RF sweet spot, according to TechTarget contributor Bill Kleyman, is 45 to 60 percent. For the safest and most accurate monitoring, place humidity sensors high up in open areas of facilities, since rising hot air can hold more humidity, but also inside racks and next to CRACs.

Some water, in the form of an acceptable amount of humidity and in pipes in the wall, is OK in the data center. But other than that, H2O is generally a pestilence. In particular, weather-induced flooding and burst pipes represent serious hazards to facility health. And while you can't build an ark and float away with your data center in a cataclysmic flood, you can, and must, be able to react quickly when the waterworks begin.

The first step to a quick response is quick detection. Flood sensors were specifically designed for this purpose. Upon encountering moisture, these cables will send a signal to a sensor that can then alert staff via SMS, SNMP and email. These water-sensitive cables should be laid in low places where water is most likely to accumulate should a leak or flooding occur.

We can fathom no circumstance in which smoke is a good thing in the data center. These electrically dense, flammable facilities are as vulnerable to fire as anything else in this world – only, should even a small fire start, the results can be disastrous for public safety, and also for the business operations that are dependent upon the facility.

Even though it probably didn't need to be said, deploy smoke detectors throughout your facility. More importantly, though, deploy them correctly. The National Fire Protection Association has varying requirements for how far apart smoke detectors should be placed, determined by, among other things, facility airflow conditions. Your facility staff, your facility and your insurance policy all depend on it.

The final piece of the puzzle: Real-time alerting